So here is the workout for the June challenge. See below for modifications.

Go for time. These are not overly complicated exercises so you can get some speed on them if you wish. Post your time (with any modifications) to our FB page.
Should take maybe 15 minutes max. Easy schmeasy.

One of our clients – Ellen – has a daughter getting married at the end of June. Naturally she wants to look her best (many of you will remember my own fitness challenge before my wedding) and, since June is the perfect month for a little challenge, I’m using her event as a challenge for all of us.

It would be great to get 50 people to commit to the Ellen challenge. Are you up for it?

Today, May 13, was Mother’s Day. But it was also the first harvest of my Rhubarb for the year. This is a happy coincidence for 2 reasons. One is that I was able to make my Rhubarb Muffins for our workout today (complete with Mother’s Day Music). But secondly, and perhaps more importantly, Rhubarb reminds me of home in Minnesota and all of the Rhubarb dishes my Mom as well as my Aunts make. And so, in honor of my Mom, on to the Rhubarb.

For those of you who don’t know rhubarb, it grows very well here in Washington as well as Minnesota. It’s easy to grow, pretty to look at and has lots and lots of uses. I have 4 plants in my yard that look quite terrific mixed in with other perennials. Just cut or pull out the stalks and cook away. The Rhubarb Muffin Recipe here is the one I used in my Cafe – 21 Union Cafe- but it originally came from my Aunt Darleen’s muffin booklet – Muffin Magic. Yes, REALLY. I add more Rhubarb than she did and use some cardamom as well. They are very moist so it may appear that they are not done. Since they are so moist, I err on the side of overdone. This makes around 18 muffins, I think. (I am always doubling or tripling the recipe for quantity).

Preheat oven to 325 degrees.Combine Flour, soda and salt in a large bowl. In a separate bowl, mix brown sugar, buttermilk, oil, eggs and vanilla. Make sure the brown sugar is not sitting in lumps at the bottom of the bowl. In a third bowl combine the last 4 ingredients together for the crumble topping and set aside. Combine, a bit at a time, the wet with dry flour mixture. Try not to over mix but do get it blended. Fold in the rhubarb and the nuts and scoop into muffin cups or greased muffin tins.Sprinkle the tops with the crumble and bake for 25-35 minutes. Take out when the toothpick comes out clean and relatively dry. Let cool.
There are many Rhubarb recipes but I’ll add one more and then link to a couple more of my friend Tom Conway of Vashon Island and his wonderful Tall Clover Farms.
Rhubarb Crisp of course is a staple in many Minnesota farmhouses but Rhubarb sauce is my dad’s favorite. We had it a lot for dessert, occasionally with ice cream. My Dad always would dump a bunch of heavy cream over it instead which we thought was gross because we thought the Rhubarb would curdle the milk. And he loved teasing us and urging us to try it. We never did.
But Rhubarb Fool is a layering of rhubarb sauce and whipped cream in a dessert dish. Amazing and pretty to boot. The sour/sweet of the rhubarb and then the creamy smoothness of the whipping cream make it a real treat. I occasionally add some frozen blueberries to my rhubarb sauce which turns it from pretty pink to magnificent magenta. Tastes great and easy to make. And talk about beautiful presentation. (I know. So gay. Lol)

Dump the trimmed rhubarb in a bowl of cold water to leach out a bit of the acid and remove any grit. Drain and chop into 3/4″ slices (cut the stalks in half if they are enormous)Combine orange juice, only 3/4 of the cup of sugar and a pinch of salt in a saucepan (large enough that will hold the rhubarb) and bring to a boil. Add the rhubarb and bring back to the boil. Reduce heat to a simmer.Stir only occasionally (otherwise the rhubarb looses all shape completely) just until the rhubarb starts to break down and is tender – 7-10 minutes.Transfer to a glass bowl to cool to room temperature. Cover with plastic and refrigerate until cold (at least an hour)
One half hour or so before whipping the cream, put the bowl and the beaters in the refrigerator to chill. Beat the cream and the remaining 1/4 C. sugar and vanilla in a mixer starting on low speed and gradually increasing speed until you have whipped cream in soft peaks.
To serve, layer rhubarb, whipped cream, rhubarb, whipped cream, etc. depending on the height of your dessert dish but ending with whipped cream. Serve immediately.

I assume that by now everyone has heard of Pilates and even tried some version of it – especially the mat work. The core work, the flexibility and the larger range of motion make it a natural supplement to many other forms of fitness and sports.
Apparently not. Today at Crossfit, we were warming up with some simple hamstring stretches – the kind of thing that we do regularly in Pilates. (The single straight leg pull/stretch, for example, combines hamstring stretching along with abdominal strengthening). One of the Crossfit clients remarked “If I had only know about this (these stretches) 10 years ago. . .”
My thought bubble – which fortunately never made it out of my mouth – was, “If you had been doing Pilates for the last 5 years, these stretches wouldn’t seem so painful or surprisingly new!” Pilates, especially among men, has had the reputation of not being hard enough. Too much breathing, too much slow movement and too much stretching. That may be partially true. But in too many cases, it is not strength that is holding a client back but flexibility and functional flexibility at that (the ability to actually go to that larger range of motion with support and control).
Pilates would be such a great help to so many athletes. The awareness, the core and the stretching are critical to ongoing athletic endeavors for aging athletes. I wish I could help athletes outside our studio see that. At Mind and Body Pilates, we may say ‘because strong doesn’t just happen’ but that strength is tested and challenged in ranges outside of normal activity so that you have control of your body in all you do.
Pilates will help you play your sport better, do Crossfit faster, help you eliminate or minimize your injuries. But you have to get yourself to a class. Then we’ll show you how we can ‘Kick your abs’ 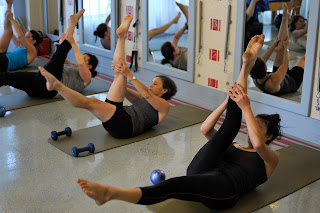 I am 51. I am in better shape today than I was in my 20s and even 30s. I want to continue to get stronger and more fit as I age as much as possible. I have concluded however, that there are a few principles that I need to adhere to in order to keep moving forward. Most people start giving up at this point in their lives and conclude that they can’t do more and so they do less and less. I reject that concept and believe that it is a matter of working out smarter without giving in to popular wisdom. So here are some of my guiding principles at this point.

I know it’s a lot to think about but really, it’s just about being smart and aware and listening to your body. Today (Saturday), I am a little too sore from a workout I did on Thursday (which is a little unusual) but I’ll be out in the garden today, so I’ll keep moving and then tomorrow, on Sunday, I ‘ll get a Pilates circuit workout in and also hopefully, swimming in the evening.