I started going to Crossfit (see the link on this page) at the recommendation of a client. Crossfit has a point of view different than any other gym/circuit style workout out there. For one thing, it kicks my ass in 15-20 minutes and I think I am in relatively good shape. It also has assessment tools for measuring one’s progress. There are 4 levels and 20 or so exercises on each level that get get progressively harder. I am still somewhere between level 1 and 2. (In level 1, the pull up requirement is 3. Level 2 is 20. I am stuck at 9-12 reps.)

THE other thing that Crossfit has is the 10 aspects of fitness: Cardiovascular and Respiratory Endurance, Stamina, Strength, Flexibility, Power, Speed, Agility, Coordination, Balance and Accuracy. I think Pilates does well with flexibility, accuracy (extremely so), coordination and some stamina. At Mind and Body we also are much more strength oriented than other Pilates studios.

WHAT we don’t do well is Power and Speed which than translates into lack of stamina in just a few short minutes. I felt that I needed to do Crossfit regularly because it seems logical that Power and Speed are basic requirements for any athletic endeavor.

SO I’ve been doing Crossfit for a year or so with a fair bit of regularity. I don’t think it substitutes in the least for my Pilates, yoga, swimming or functional training work (although many ‘crossfitters’ would beg to differ). Naturally, I have incorporated some aspects of Crossfit into my own teaching: more circuits and reps (although I did some of that before crossfit), Tabata intervals (more on that later), more squats (which are so functional and everyone hates to do), etc.

BUT I don’t want to lose sight of what is Pilates and the heart of that work. After all, Mind and
Body is a Pilates studio. I don’t believe though, as many Pilates teachers do, that Pilates is defined by its choreography. I keep trying to nail down a specific philosophy that is distinct from other forms of fitness. I keep narrowing down to :

SO today is a day to incorporate something of yesterday’s Crossfit workout into the Sunday class. We’ll use the principles of continuous work, 5 exercises and 3 rounds with a 1 minute rest in between each round. But I want to use Pilates or Pilates evolved exercises.

IT should be fun and hard. BTW, here is the Crossfit ‘Fight gone Bad workout’:

In this workout you move from each of five stations after a minute.The clock does not reset or stop between exercises. This is a five-minute round from which a one-minute break is allowed before repeating. On call of “rotate”, the athletes must move to next station immediately for best score. One point is given for each rep, except on the rower where each calorie is one point. 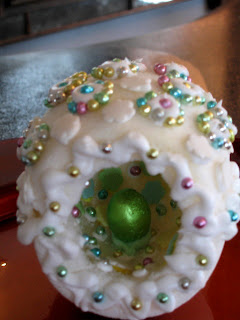 I usually do an Easter dinner. Not that I am particularly Christian these days but at the very least I recognize that these holidays are a chance for friends and family to come together to reconnect and maybe even reflect.

I always do an art project at my dinner parties. Christmas was making paper snowflakes; Easter was going to be Panoramic Easter eggs. My mom had one when I was a kid and it was so magical to look into the little hole of that sugar egg and see the scene inside. If you’re trying to imagine what I am talking about, here’s a visual:

With a quick Google search, I found the recipe and directions on the Internet. Here’s the link: http://scribbit.blogspot.com/2007/03/sugar-easter-eggs.html.

Making the molds was a bit messy but not too arduous. And I had such a great time watching everyone make their own egg creation. 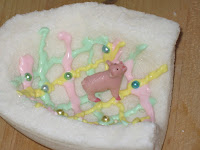 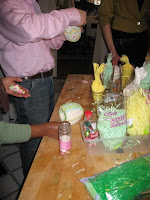 First, you create your ‘scene’ inside the bottom half but to my surprise many of my guests decorated the ceilings too – starry, starry night on a vaulted ceiling. I couldn’t find any tiny toys on short notice so I ended up with pigs, trains and airplanes.

The royal icing is for decorating and for gluing the 2 halves together. After the egg is glued together, the egg is decorated. 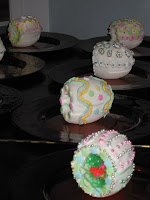 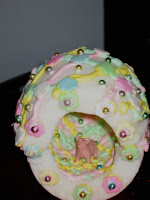 I never dreamed it would be so fun. And we hadn’t even started on the food. The menu was based on a color theme of springtime yellow and green and fresh spring ingredients of asparagus and herbs like tarragon and parsley. After all it was the vernal equinox too

Everyone helped contribute with ingredients and wine and champagne and one of my friends making the fabulous cake. Here are the link to the recipes:

With a couple vegetarians among my friends, I decided to assemble the ingredients separately and let everyone put their own together. 1. frozen peas, thawed. 2. carrots, small dice. 3. roughly using Nigella’s recipe, I sauteed the chicken pieces separately and made the gravy with the broth. 4. I skipped the bacon and sauteed some onion and garlic, added the flour and then vegetable broth and some white wine. We cut out the puff pastry (no the same as phyllo dough, btw) to fit the top of the cutest little footed soup bowls that I found at Crate and Barrel. It’s all in the presentation: 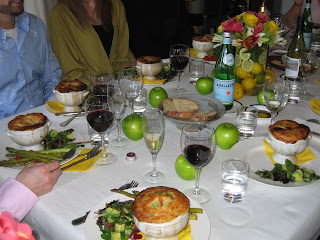 By the way, when I do a dinner party, I usually try to set the table a day or 2 before. It gets me in the mood and I feel like if the table is set, no matter what has happened in the kitchen, it still appears you’re ready to entertain. In keeping with the yellow and green theme, there’s nothing fresher looking than a granny smith apple. I love that color. 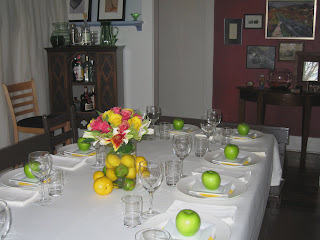