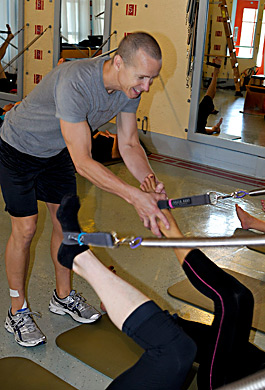 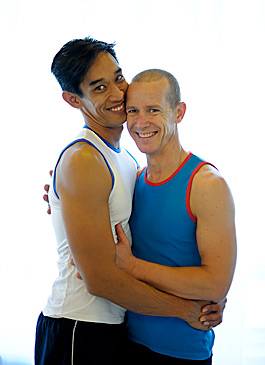 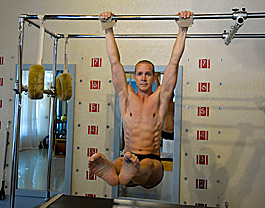 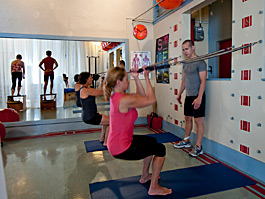 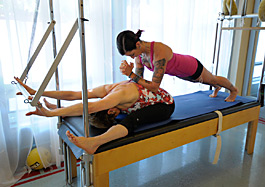 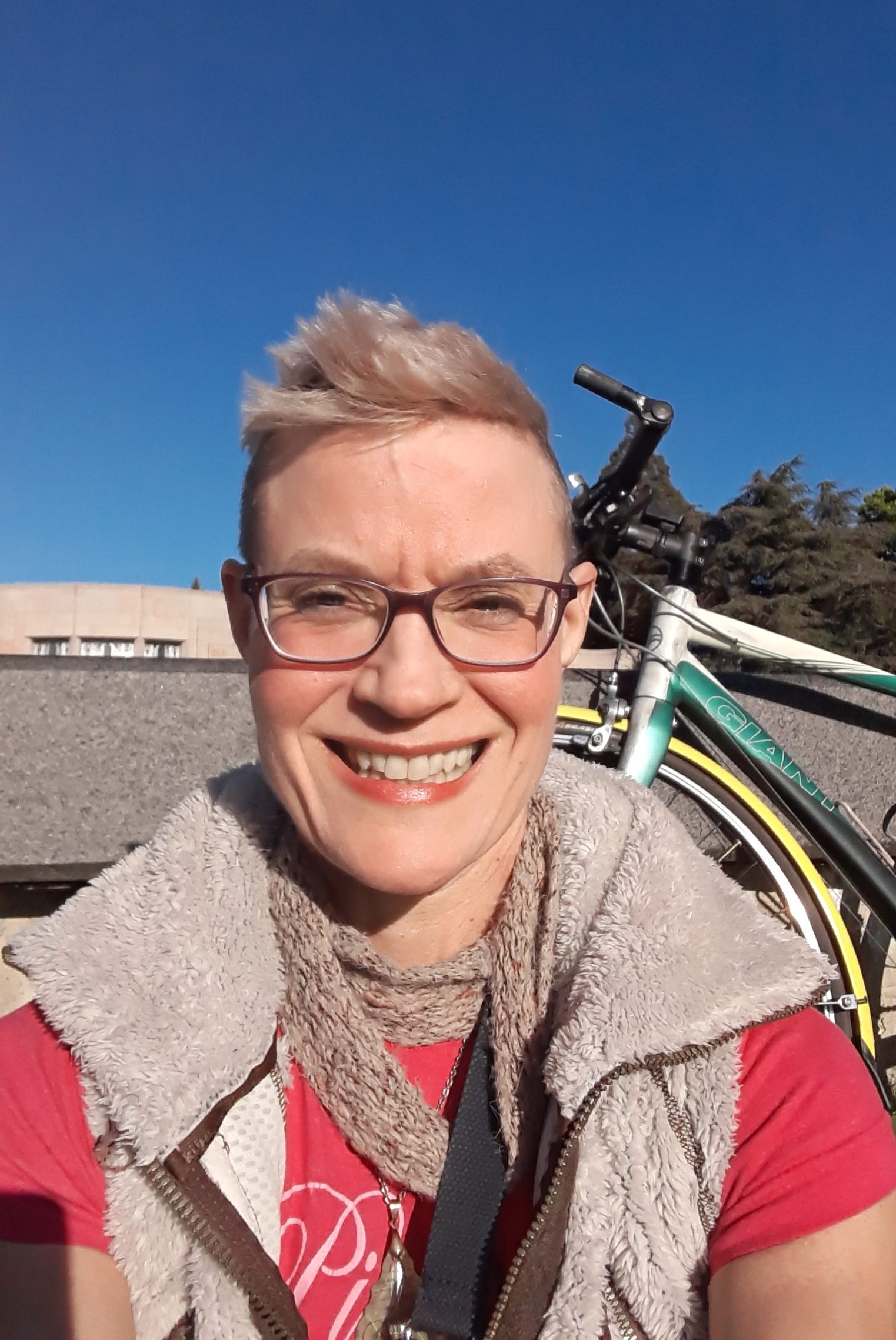 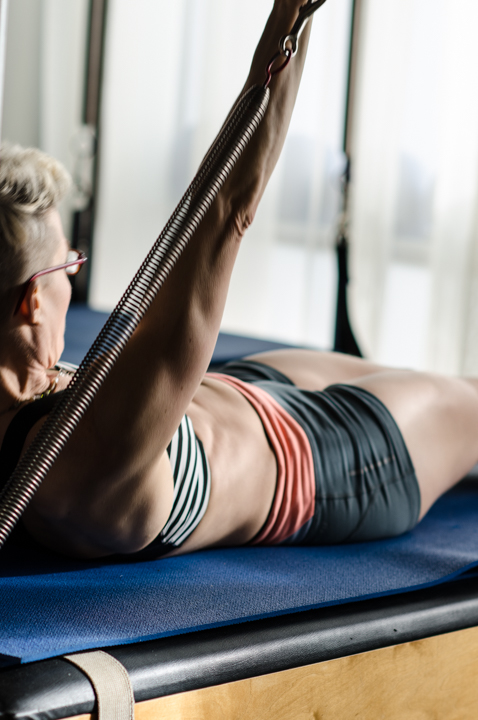 Dana-Joel Belkholm has been studying Pilates since 1993. After weight lifting, running, swimming and dance, it was Pilates that was the most well rounded workout, addressing body imbalances, strength and flexibility. He started at Erskine Fitness (one of the first Pilates studios in the city) as a client, studying with Jane Erskine.  Two sessions a week quickly became three, which then became an everyday routine.  At that time, Erskine Fitness was the only non-traditional studio in Seattle. (This was also before the New York studio starting suing various studios around the country for using the term Pilates - a lawsuit that they lost incidentally.)

At Erskine Fitness, Dana became the office manager which allowed him to 'do Pilates' as often as possible.  Being in the studio daily and observing and learning from all of the other instructors (as well as Jane) allowed Dana to immerse himself in the method.  Many of teachers with their own studios started at Jane's.  And after an informal apprenticeship (there were no real 'certification programs' at that point), he started teaching beginning Pilates as well as studying with Cary Regan who had moved from New York City and the original Pilates studio and was teaching at Erskine Fitness.

When Cary Regan moved to Seattle, bringing her extensive experience in the "New York style" to the West Coast, she was the most experienced Pilates teacher in the Northwest.  She had studied, taught and managed in the original New York studio with Romana Kryzanowska and was in Romana's first certification program with Bob Liekens (NYC) and Phoebe Higgins (NYC) as well as Romana's daughter, Sari.  Cary was able to teach all of the details and intricacies of the Pilates method and freely shared her knowledge at Erskine Fitness.

In 1997, Dana moved to Hamburg, Germany to pursue an opera career.  There, he ended up teaching at one of the few studios in Hamburg - Das Studio fuer Koerperbewuesstsein.  When he came back from Germany in 1998, he completed a formal certification program with Ms. Regan and she invited him to teach in her own studio on Capitol hill - One-to-one Training at Velocity Dance Studio.  They later became business partners and were looking to move the studio to a new location when family issues called Cary back to NYC.  But it was these years of teaching alongside Cary while observing and absorbing all of her knowledge as well as continuing to study with her that has given Dana the depth of knowledge that goes far beyond the average teachers knowledge.

In 2000, he moved the studio to a 3000 square foot space in the Central Area and became Mind and Body PIlates. The vision was to provide private reformer based training as well as a large space for classes utilizing other Pilates equipment thus making it more affordable to a larger population. He taught there as well as at West Seattle Ayervedic Studio. It was in this studio, that he adapted and developed the Wall springs (which is taken from the work done on the Cadillac) This work was, at that time, not taught anywhere else in the U.S and has continued to be an exclusive aspect of Mind and Body Incorporated.

Throughout his career, Dana has taught all types of clients from young to old, active to therapeutic. He has gained the trust of many Physical Therapists in the city and has conducted workshops for the Physical Therapists at Virginia Mason as well as Olypmic Phyisical Therapy.  Because of his 50+hours/week teaching schedule, he is among the most experienced teachers in the Northwest. But more importantly, is breadth of knowledge comes not merely from his teaching experience but in the recognition that the students are the real teachers and the teacher must always be a student.

Verna Kilic started coming to Mind and Body Pilates as a beginner in 2004, and has continued to learn ever since. Coming from a background as a speech language pathologist, she understands how important it is to be able to teach functional skills systematically, keeping the individual in mind as well as general principles of fitness, health and wellness. Verna leads small group and individual classes focusing on basic Pilates technique through a variety of exercises designed to strengthen and improve flexibility. Verna believes that a sound body awareness and fitness are essential keys to quality in everyday life. Mind and Body Pilates weaves together many disciplines to challenge and tune each student physically and mentally, adding in fun, music and creativity to keep it fresh!

Lori has been practicing Pilates, mostly right here at Mind and Body, since 2008. Following an injury, it was a physical therapist (Ph.D.) that first recommended Pilates, and Dana specifically, to address some imbalances and postural issues and so the journey began.

With a lifelong interest in athletics, fitness and just staying active, including exploring bodybuilding as a teen, and most recently several years swimming. Her other main exercise outlets, currently, include walking and biking any and everywhere. The magic is in the hills!

It was 2013, returning to Pilates after a bike accident in 2012, when she started an official apprenticeship with Dana. Through her own practice at the studio, and observing and assisting Dana with a variety of classes, she gained a deeper understanding of movement and working with clients. She enjoys the variety that the Mind and Body Pilates environment provides and the mixture of modalities.

She loves the whole body (and mind!) aspect of Pilates and all of the influences that Joe Pilates brought to his method; its excellence at addressing imbalances, and focus on body alignment and  awareness is unparalleled. Add to that the philosophy of starting where you are, which can be challenging for humans, and you have found something more than an exercise routine.

Lori believes strongly that there is power in approaching Pilates with a beginners mind every day. You can always go deeper. Lori stresses the importance of concentration and bringing an awareness to your body, building what is known as kinesthesia. She seeks to encourage everyone to be open, patient, and shares in the joy when a new muscle is discovered, or an ah-ha moment between one’s brain and one’s muscles is experienced (a new neural pathway!), or when you do that thing that was impossible the first time you tried. It’s exhilarating stuff!

In our crazy, busy world with all of the stresses and demands of life, combined with the fact that so many folks have a job in which they spend all or much of their time in their heads, perhaps a lot of time at a desk, and most likely at least somewhat disconnected from their body, it’s all the more important to spend some time reuniting the two - the mind and the body. Lori’s wish for everyone who walks into the studio is that you will leave your worries at the door, get lost in moving your body, work it out, sweat it out - breathe; and leave feeling lighter, taller, stronger and just a little bit more connected to you. Hopefully, that feeling will carry over into every other aspect of your life.

The Pilates journey, and movement exploration is one that never really ends and so the learning and discovery continues; Lori attends and participates in continuing education opportunities on a regular basis. There’s always something to learn, and it’s an exciting process to share with others. Her current mantra for Pilates, movement, and life, “I’ll do my best today.”

See you in the studio, and good movement to you!

Joshua’s passion for movement took center stage when he joined the middle school dance team at age 14. Ever since then, Joshua has continued his education in dance and physical movement.

In 2018 Joshua successfully completed the Pilates Mat Teacher Certification and since, has been working with private clients. Currently, Joshua is apprenticing with Dana Belkholm at Mind and Body Pilates and is excited to give back to the community and continue learning and growing his passion for movement.