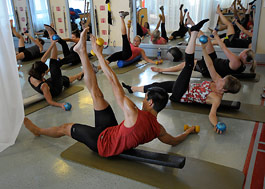 HISTORY OF MIND AND BODY PILATES IN SEATTLE

In 1998, Dana Belkholm had returned from teaching Pilates in Germany and was teaching at Erskine Fitness on Queen Anne in Seattle.  His teacher, Cary Regan had just opened a Pilates studio - One-to-one Training - in Velocity Dance Center on Capitol Hill and invited Dana to join her in her studio.  It was there, working beside and under master teacher, Cary Regan, that allowed for a breadth and depth of understanding of the Pilates method that few teachers have the privilege of experiencing.  Thousands of details and special assisted stretches were learned and honed to start Dana on his own Pilates career.

In late 1999, Dana incorporated Mind and Body Pilates but continued to teach alongside Cary Regan until Dana moved into his own studio in the Central District and when Cary returned to New York City.

In 2001, Mind & Body Pilates moved to 21st and Union in the Central District of Seattle.   It was our dream to create a studio for Pilates that was unconventional, approachable and knowledgeable while bringing our individual passion to our teaching.  The original Central District space was 3500 sf with 2 treatment rooms, a large private pilates studio, a cafe and a 1000 sf classroom.  It was that time that Mind and Body offered a Teacher Certification Program that produced several teachers who have since opened their own studios as well.  To create 'thinking teachers' was our goal because we believe the 'thinking teacher' is the one who can best adapt an exercize to fit the client and best can create a program to address clients needs and goals.

Today, Mind and Body Pilates is a fully equipped Pilates studio with all of the traditional Pilates equipment:  Universal Reformers, Cadillac (Trap Table), Wunda Chairs, Ladder Barrel as well as other small equipment.  Our light filled studio has 16 foot ceilings and soaring curtains; it is a flexible 1000 sf studio for both privates and classes.  We also have Rowers, GTS (Gravity Training System) as well as Kettlebells, a Pullup station and other 'toys'.  After so many thousands of hours of teaching, Dana and Mind and Body Pilates is highly skilled and fine tuned studio for all levels of fitness.

In addition to our unique Pilates style and tremendous experience, Mind and Body Pilates has the Wall System which is the first of its kind in the nation - developed by the owner and master teacher - Dana Belkholm.  With 12 of these Wall Systems, complete workouts can be done which mimic many of the exercises on the traditional Pilates Trap Table and Reformer.  We have also greatly expanded the repertoire to include Pushups, Pull ups, and other gym type exercises.

We like to say 'Toys are us' because we incorporate so many different pieces of equipment in every class and private session.  These toys or props are invaluable tools for more effective and safer workouts as well as making many of our circuit classes more intense.